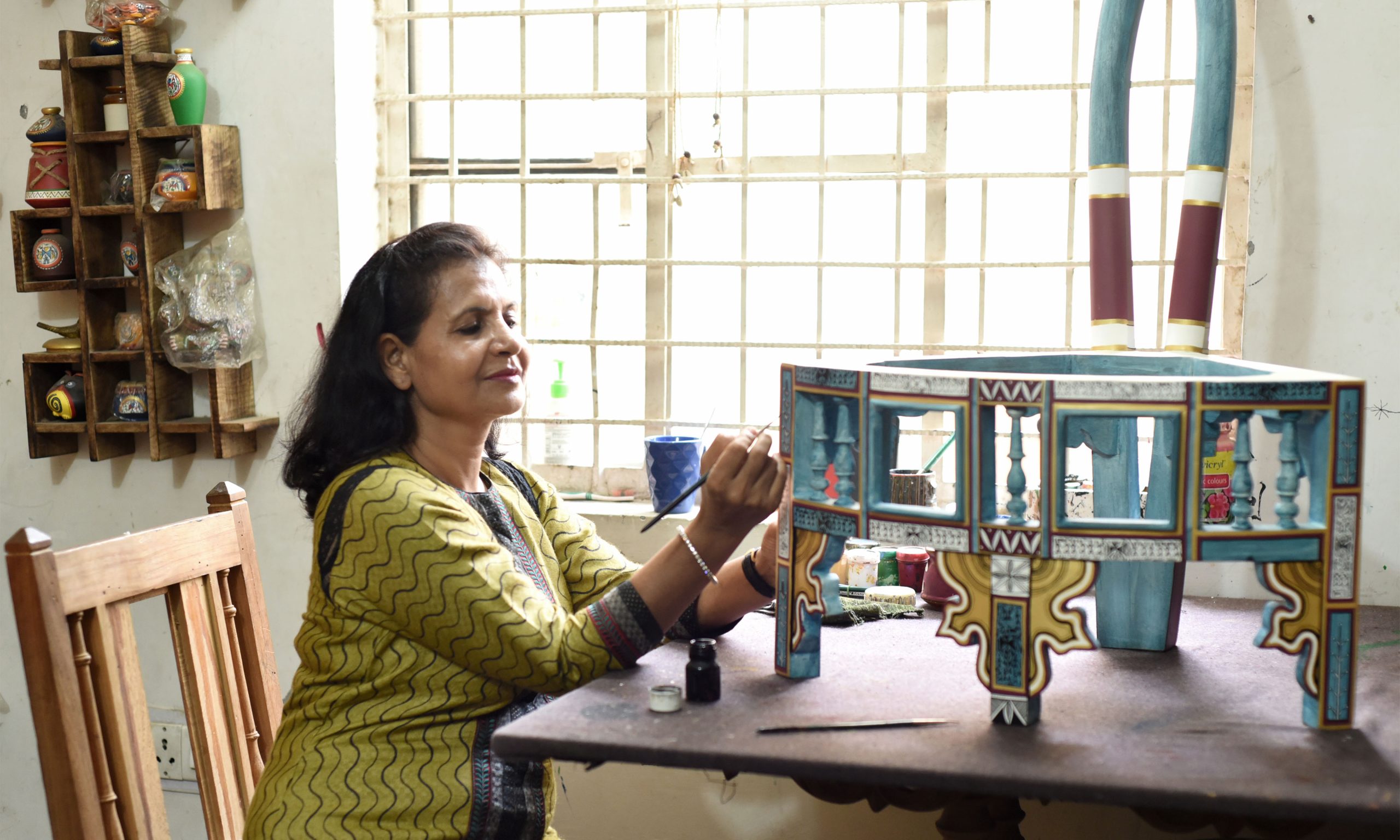 Aakriti Art Creations is a vibrant enterprise creating exquisite hand crafted Furniture and Home Decor products. Its founder, Suman Sonthalia is intensely involved with design as an art form. The designer draws on history, fantasy and folklore to create masterpieces that are desired by discerning aficionados around the globe. She has a deep understanding of her customers and it reflects in her collections that are intelligent, studied, imaginative, completely innovative yet always relevant and awe-inspiring.

The celebrated designer graduated from being an artist to a successful entrepreneur in a very short span of time. Her products under ‘Aakriti’ brand are well established in Home improvement and Gifts segments.

Suman’s sense of aesthetic is so finely honed that it has taken her handcrafted work to perfection. She is recognized for her attention to details and prefers to use environment friendly material like paints created from Vegetable Dyes, Handmade Paper, Re-purposed Wood, Jute, Terracotta Clay, Ceramic Clay as well as Handcrafted Brass Accessories in her collection. The product range comprises of Dhokra-Warli Painting, Kitchen Utility Items, Lights and Hanging Lamps and an entire range of Home and Ethnic Art Furniture, Wall Decor and Clocks, Wind Chimes, Jewellery and other Gift Items.

She draws from influences, wide and varied. From the village crafts and traditional methods of design that India is so rich in, to the transient phenomenon of the sub continent’s urban landscape, the designer brings them all to life in her spectacular yet original creations. Aakriti Art Creations resonates with Mrs. Sonthalia’s spirit and as a result her products have found dedicated spaces at the most prestigious stores across India and globe. 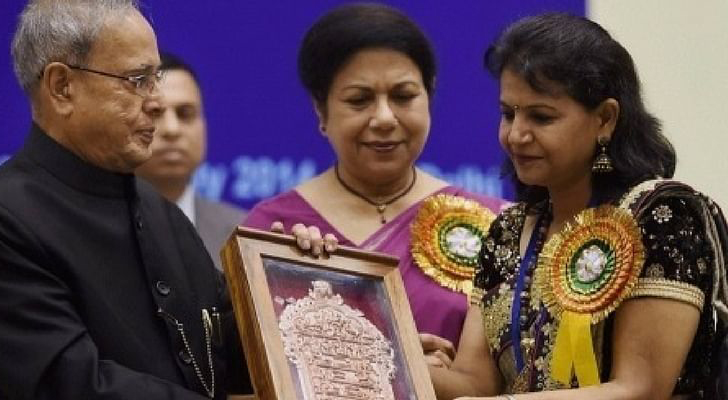 Suman Sonthalia has been honoured with awards and accolades for her work. She was awarded President’s National Award for Master Craftsperson in 2011, State Award in 2010 and State Merit Award in 2009.

Suman makes it a point to use her knowledge and experience in fulfilling her social responsibility as well. She has trained more than 3000 under privileged women in this art form and helped them get a respectable livelihood. She also takes workshops at schools and colleges to promote these art forms. For every piece sold at Aakriti, you are truly helping someone who need it more than you.

Suman Sonthalia is a successful entrepreneur in her own right but the journey has been anything but easy. She not only had to work hard with determination and nurture her innate talent, but also overcome obstacles of all kinds. As the founder of Sahibabad-based Aakriti Art Creations, she helps women who are dependent on their husbands for monetary aid.

When Suman started Aakriti Art Creations, she did so with a desire to help such women. She went from one alley to another in search of such women. The women whom she found were earlier working as maids or nannies or were employed in some other odd job.

Born in a conservative Marwari family in Kolkata where girls sometimes have to give up their dreams due to lack of opportunities, art was very remote for her. But she never gave up and kept working on her art till opportunity came knocking at her door in the guise of her husband, BB. Santholia, an iron merchant and a trader. While talking about this, she says,
The formative years for Aakriti Art Creations were only about painting Warli art and selling them at various cottage stores. But my husband BB Sonthalia took deep interest in my art and encouraged me to pursue it.

Suman’s Skill India Training Centre, situated in the industrial city Sahibabad in the national capital region, designs different types of handicraft that have worldwide demand. The designers here are mostly women and a few of them suffer from visual impairment as well.

When Suman decided to get into the handicrafts business, the first person she roped in was her housemaid.

The manner in which Suman chose her team was very unconventional. She realised that there must be many like her who would want to step out of their homes and explore avenues. Once she began looking out for such women, there were many who seamlessly came in touch with her.

Soon, the total strength of women working for her went up to nearly 250. These included 10 visually impaired women working in her factory.

Today, products made at her factory range from household decorative items to mementos, and are in high demand thanks to their intricate designs. A table designed here now sits in the Rashtrapati Bhawan.

Today, Suman’s success is entirely due to her determination and hard work. Awards and recognition, first at the Delhi government level and then at the national level, have been the icing on the cake.

Our team is here to answer your questions. Ask us anything!

General Queries
Available
Hi, how can I help?